Presumptive President-elect Joe Biden will be in a cast for several weeks after a fall over the weekend left him with hairline fractures in his right foot, Fox News reported.

Biden, who at 78 will be the oldest U.S. president if he’s inaugurated on Jan. 20, initially sought medical treatment Saturday after slipping while playing with his dog, Major, at his home in Wilmington, Delaware, the report said.

According to CNN, the injury initially was thought to be a sprain. On Sunday — “out of an abundance of caution,” Biden’s team said — the Democratic candidate saw an orthopedist, where scans revealed the fractures.

“Initial x-rays are reassuring that there is no obvious fracture and he will be getting an additional CT for more detailed imaging,” Dr. Kevin O’Connor said in a statement.

“Follow-up CT scan confirmed hairline (small) fractures of President-elect Biden’s lateral and intermediate cuneiform bones, which are in the mid-foot. It is anticipated that he will likely require a walking boot for several weeks.”

TRENDING: Trump Gets Rousing Response from Supporters as He Returns to Florida

Major is one of two German shepherds the Bidens own.

“Fractures are a concern generally as people age, but Biden’s appears to be a relatively mild one based on his doctor’s statement and the planned treatment,” The Associated Press reported.

“At 78 he will be the oldest president when he’s inaugurated in January; he often dismissed questions about his age during the campaign.

“Reporters covering the president-elect were not afforded the opportunity to see Biden enter the doctor’s office Sunday, despite multiple requests. Leaving the doctor’s office to head to an imaging center for his CT scan, Biden was visibly limping, though he walked without a crutch or other aid.”

Video of Biden’s entrance to Delaware Orthopedic Specialists and video of him limping were both uploaded to social media with all due rapidity:

WATCH: President-elect Biden went inside to Delaware Orthopaedic Specialists after he slipped while playing with his dog, Major, earlier today. pic.twitter.com/XD2cykmMhq

So, too, were the backhanded well-wishes and/or hot takes:

Playing with his rescue dog is the most Joe Biden way to get a stress fracture. Heal fast, Mr President-Elect! @JoeBiden #GetWellJoe https://t.co/POoSDs3vyW

.@JoeBiden twisted his ankle playing with his dog.

That would never happen to @realDonaldTrump.@realDonaldTrump lacks the compassion to love anything and the humanity to find joy in showing affection.

Biden slipped and fell while playing with his dog today. When doctors examined his foot and discovered hairline fractures, Biden explained that, no, it wasn’t the fall that cause them. It was the serious ass- kicking he gave Trump in November.

Oh, George Takei, you incorrigible wit. Thanks for recycling every dad’s favorite joke when they’re asked about how they injured anything below their knee.

There were also conservative hot takes, although they didn’t involve dogs hating Trump or Biden supposedly delivering a butt-kicking in a still-contested election in which he greatly underperformed the polls.

Biden broke his foot yesterday and we’re just hearing about it 24 hours later. Let that sink in.

So Biden fell down and hurt his foot, eh? Sprained ankle?

Didn’t happen before the election, why now? How many “accidents” are we looking at, eh #wdshow

If you criticized how Trump handled his positive COVID test but are now giving Biden a pass for covering up his broken foot you are a partisan h-a-c-k.

As for the president himself, he merely wished Biden well.

Meanwhile, liberals on social media were trying to shut down any talk about Biden’s age.

WARNING: The following tweet contains graphic language that some viewers will find offensive.

FYI: “hairline fractures” are a very common injury, including in many young people, particularly those serving in the military. Please don’t turn this into some ageist bullshit. Biden hurt his ankle while playing with his dog. It will heal. That’s all there is to it.

There are two arguments against this proscription. The first comes from author and activist B.J. Mendelson, certainly not a right-leaning conspiracy theorist:

I get super nervous when old people go down with a fracture.

Usually that’s the precursor for something else breaking.

It happened to my grandfather before he died. He was 91, though. Biden isn’t *that* old, of course, but it’s still nerve-wracking.

The second comes from the same media that’s not making a particularly big deal over this: 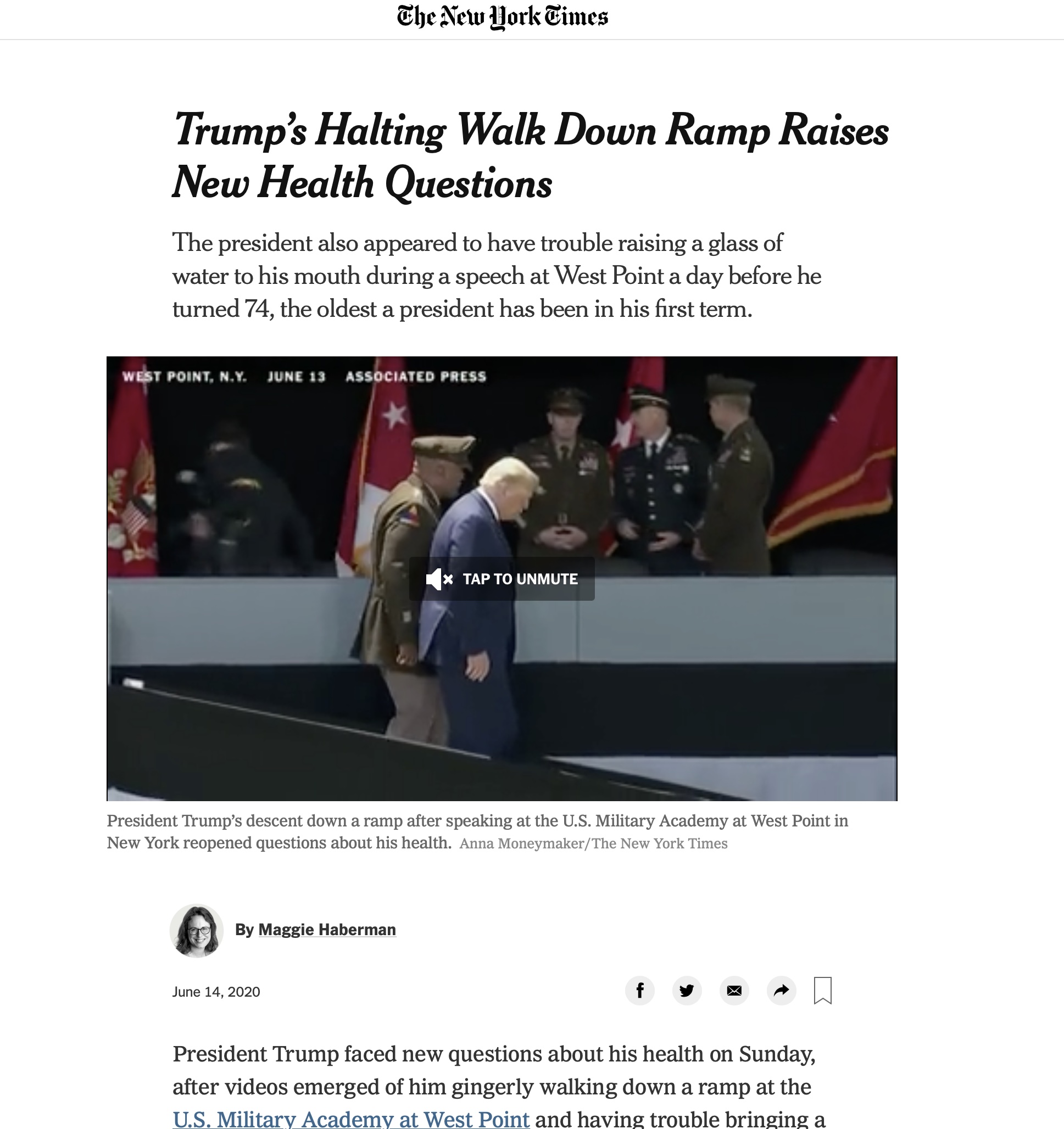 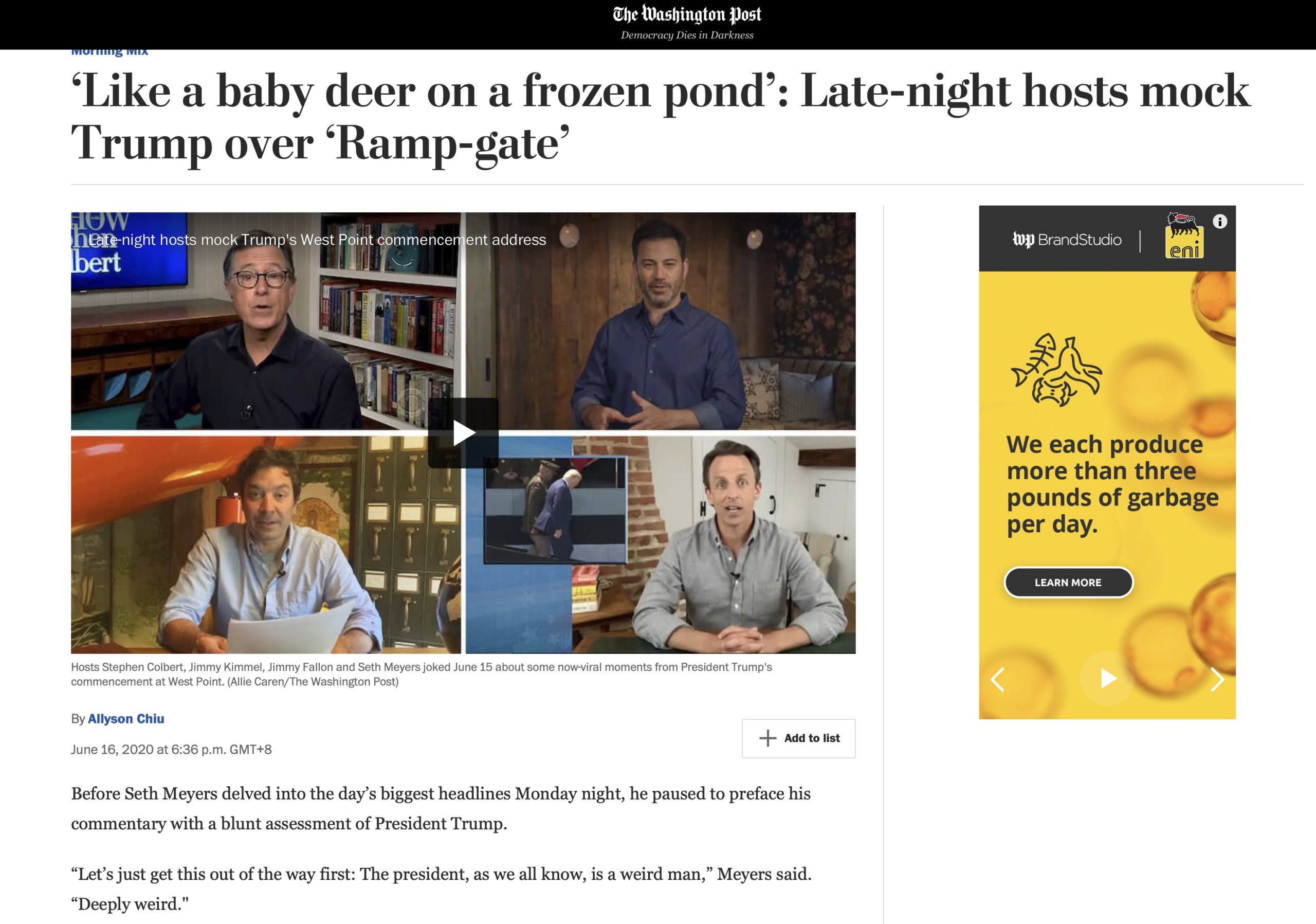 This was in June, when the president walked down what he said was a slippery ramp at the end of a speech at the U.S. Military Academy. Biden’s campaign even used the footage to sow doubts about Trump in an ad that used footage from the event to contrast the president with the supposedly active Biden:

“Some people are always in a hurry. They run when they could walk, race up steps when others take it slow. When Joe Biden is president, America is just going to have to keep up.” pic.twitter.com/IoioQRI6KE

Biden is coming off a campaign in which he made countless gaffes involving leaving the record player on at night to combat systemic racism, saying poor kids are just as smart and talented as white kids, forgetting where he was or what office he was running for on occasion and even confusing his wife with his sister.

Nobody hopes this is a portent of troubles to come, but excuse us if we raise an eyebrow or two.

Given how the likes of Maggie Haberman reported on Trump walked down a ramp, I’d say it’s fair game for some minor-key concern.

Trump Gets Rousing Response from Supporters as He Returns to Florida

All police are not the problem because of one bad cop, even though that is all the MSM will show.